The Joys of Roasting a Duck

Sometimes you discover recipes, or just general acts of doing things, and wonder to yourself why you hadn’t thought of doing it earlier. That’s sort of how I felt when I roasted a duck this weekend. Seriously, why haven’t I done this before….It’s so easy, and the rewards are endless.

I think, partially, I avoided it because the idea of cooking something bigger than a chicken seemed intimidating. Not to mention, duck isn’t your average white meat/dark meat poultry. I’ve cooked duck breasts before, seared to medium rare like a steak, and was comfortable with that, but I just never attempted a whole duck. Until now! Now keep in mind, roasting a duck does not give you breasts like searing does. Mine had some pink, and were moist and tender, but it’s a totally different animal.

I picked up my bird (weighing in at nearly 6 lbs)  at the end of last week, from the same poultry farm I get my chickens. It ran me somewhere between $4-5 a pound, which is not much more than chicken. I decided to make it on saturday, so I had it in the refrigerator until then. Up until this point, I didn’t have a proper roasting pan, or even a roasting rack. I had been roasting my chickens in a glass Pyrex pan, propped up with tinfoil, which worked great, but with the bigger bird, I thought it time to be legit. I picked up a basic roasting pan w/ rack for $15 on sale at Bed Bath and Beyond….and we were in business!

Now, you know me, I’m not one to follow recipes. But, with the exception of seasoning, I followed the prep and method from this blogger to a T. It worked great, so I really felt no need to mess with a good thing! [Click on any of the pictures of my finished bird, to click-through to the original blogger’s recipe, or click below ]

To season the bird, I sprinkled it with salt, pepper, rosemary, and thyme after scoring the fat, before putting it in the oven. Then I did the poke-flip every hour method she outlined. Remember, if you are going to put a glaze or something on at the end, strain the fat after the last hour, before putting the glaze or sauce on! I got almost 2 cups of glorious, glorious duck fat! I just strained it into a mason jar with a fine strainer/cheesecloth combo. It’s the best cooking stuff ever…. to discard it….it’s almost sacrilege!

I seasoned my bird with a combination of salt, pepper, rosemary, thyme, and dried orange peel. After draining the fat at hour four, and roasting at the higher temperature for 10 minutes,  I splashed on some coconut aminos and roasted for a final 3-5 minutes more before letting it rest for 10 minutes. Following the hourly “Flip-Poke” method as outlined on the page, I had this beauty! 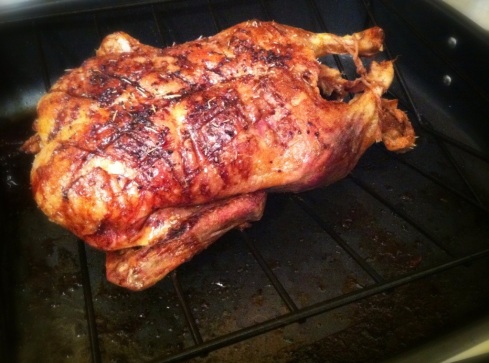 Let me tell you…..Delicious! The four hours it takes to cook was so incredibly worth it. The meat was moist and flavorful, and getting all that duck fat out of the deal makes for some serious economic bonus. We ate some of the breast for dinner, and then again in the morning, as well as throwing the dark meat into some breakfast hash. Oh, and new guilty pleasure…..Duck Cracklin’s! Move over pork rinds (not that I’m a big fan), there’s a new crispy skin treat in town! When making breakfast, I took some of the skin, and put it on the griddle, flipping once, until it was fried in its own fat and crispy. It might be better than bacon.

Yes, that’s some crispy duck skin on the left….Holy cow good. Duck breast on the right, and in the middle is a mixture of Japanese Yams, Red Onion, and duck leg/thigh meat. Season with Salt, Thyme, Nutmeg, and Cinnamon.

Oh, and the carcass? I’m totally sticking that in the crock pot to make stock. I also have to figure out something to do with the giblets (Which included a gizzard, liver, and kidney….I believe).