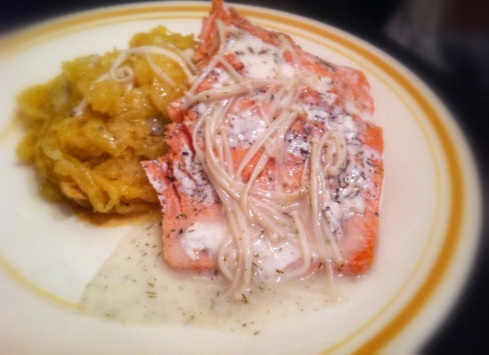 Coconut milk is great for making simple gravy or sauce to spice up any meal. In this case, I decided to use dill and lemon, to make a cream sauce for a nice salmon filet. I had some enoki mushrooms that I picked up at the Asian Market, and decided to throw them in too. They are really mild in flavor, so it just added some more texture.

Bake covered at 375 degrees for about 30 minutes, until it flakes easily with a fork and is cooked through but still moist.

In a sauce pan, heat the coconut milk, lemon juice, dill, and enoki muchrooms covered for a few minutes and stirring occasionally. Then, uncover, and let cook down until it’s a little thicker to your liking.

I served with baked spaghetti squash, sprinkled with salt, pepper, and thyme.