Happy Holidays everybody! Now that everything has settled, I have just come to the realization that it’s been almost 10 days since I’ve posted anything, so I feel like a totally horrible blog person! It’s just been a little crazy with the holidays, as I’m sure many of you can relate. The funny thing is,  I didn’t even do that much cooking! I got my gifting stuff done pretty early, but there’s always some last-minute thingy-ma-bobbers and I was helping Mike with his last-minute wrapping. I do have a few tidbits to recap from the past week that I can share as part of my Holiday Post 2013!

Growing up Italian, Christmas Eve meant seafood….lots and lots of seafood. Staples were always Smelts (Basically a bait fish….Dredged in flour and fried), Baked Flounder, Stuffed colossal Shrimp, Crab Sauce, Stuffed Crabs, Baked Clams, Seafood Salad, Scungili Sauce, and Bacala (Salted Cod). Aside from the inevitable pasta, Most of this is very un-paleo because of the breading. For the past few years, we’ve been going to a restaurant, since my great-grandmother stopped cooking the feast a decade ago at 89 years of age, and it was getting too hard for my aunts and grandparents to carry the traditions on as they were. I miss them, but I think one day when I have the space and time, I will start something new, healthy, and paleo, but similar and inspired by my heritage. I love me some seafood!

I bring this up, since it was the inspiration for the dinner I made a few days before Christmas.  I happened to find a bag of Smelts at one of my Asian Groceries, and had to buy it! I dredged about half the bag in Coconut Flour (Seasoned with salt, pepper, nutmeg, oregano….you can do anything here), as sautéed them in coconut oil. The coconut flour didn’t stick as well as I hoped, So I might dip them in egg next time, but in reality, you don’t even need the “breading”. They were so good, and definitely brought back memories from past Christmas Eve’s! 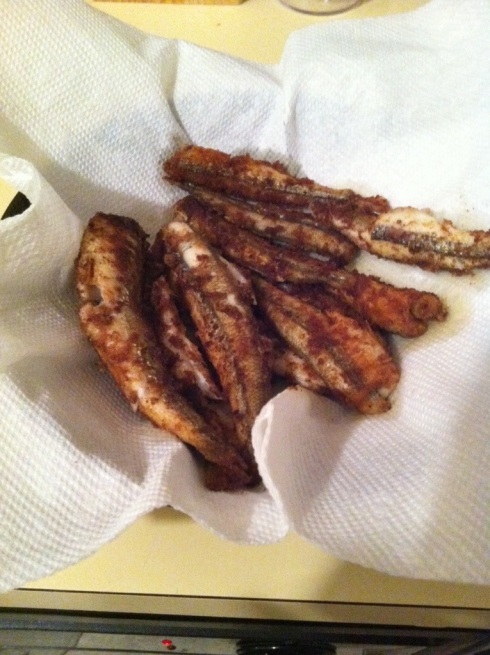 To accompany my little fried fishies, I rolled a few flounder filets in coconut flour (with Salt, Pepper, Basil, Oregano) and Baked them for 12 minutes or so at 375. 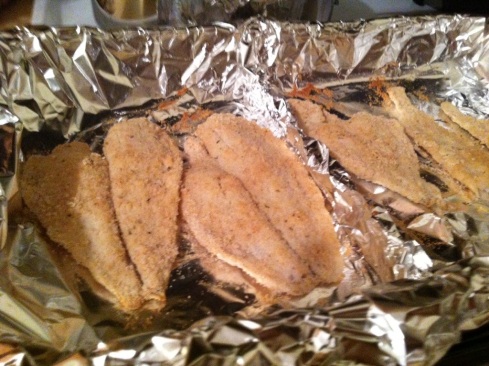 These came out really good as well. I knocked off some of the extra coconut flour after they cooked. They were just the right amount of moist inside, with the dry flour outside. It was definitely beginning to feel like Christmas after that!

For Christmas, we went to both My parents, and Mike’s Mom’s parties. At my parents house, there were lots of paleo options. Brussel Sprouts, Spaghetti Squash and Meatballs, Turnips, Cauliflower, Parsnips. The desserts weren’t completely paleo, but almost everything was gluten-free. I sampled the gluten-free apple pie, as well as some gluten-free cookies and the gluten-free cake pops my sister made. Honestly, it didn’t kill me, and while I make it a point to stay away from gluten and dairy, I felt it wasn’t a big deal  to sample some of the treats since there was no gluten. I knew that at Mike’s Mom’s house the desserts were all going to be off-limits, so I indulged while I could. At his Mom’s. I stuck to sweet potato casserole, turkey, ham, turnips, and any veggies available. It was pretty easy to eat according to my rules. The only un-paleo thing I had, was a small portion of a wild rice dish with mushrooms and cranberries….it was good.

I DID make paleo cookies to contribute to the mix at both parties. The first type I made were Snickerdoodles, from CaveGirl Cuisine. Click my photo to go to the recipe on her page. These were awesome! And since I used my Ninja Blender (Dough Attachment) they were SUPER easy. 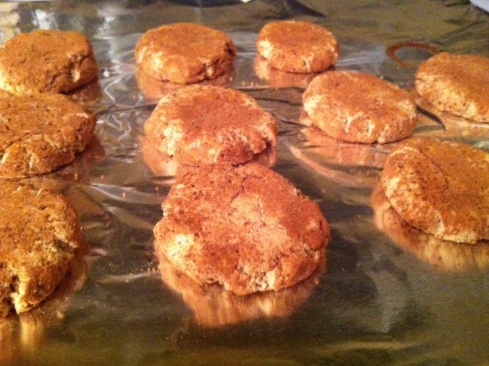 Click to go to the recipe at CaveGirl Cuisine’s Blog!

The second type was Paleo and Nut-Free Cut-Out Cookies from  The Paleo Mom’s Blog. I used unsweetened cocoa powder instead of a bar of chocolate. I decided to make them into Dinosaur Shapes, since they were paleo….and well dinosaurs are awesome! They were a little crumbly, and hard transfer to my cookie sheet, but I managed. I blame my cookie cutter, and Brontosaurus having a thin, weak, neck. They had a strong honey flavor and weren’t so chocolatey, but they were delicious! I would definitely make them again! Click the picture for the recipe. 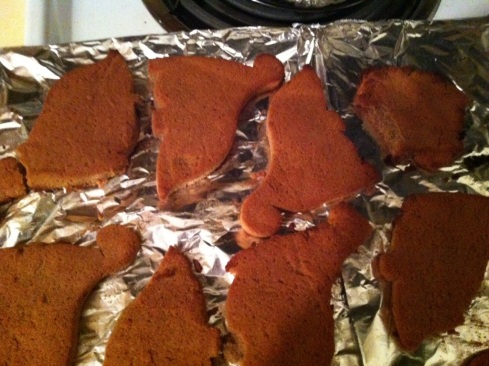 Click to go to the recipe at The Paleo Mom’s Blog!

Overall, I think I made it through the holidays successfully. No major upset to my digestive tract! With the drinks, and treats I don’t normally eat, including the nut/rice/processed stuff and sugar involved in the gluten-free desserts, I was a little gassy the next day, but clean eating on Thursday cleared it right up. I’m ok with that, and it was totally worth it! Part of living the way I do, is being smart enough to know that one day of treating yourself a little, shouldn’t de-rail you. Especially if you stay away from gluten and dairy! Life is also about having fun, not stressing!  I am strong enough and smart enough to know my body now, and what I can and cannot handle on occasion. Even though I was a little gassy, I wasn’t suffering from headaches, or pain, or major bloating and discomfort. I felt ok!

Anyway, I hope everyone else had a holiday that was as warm and loving as mine, and made it through with similar success! Eat, Drink, and Be Merry! 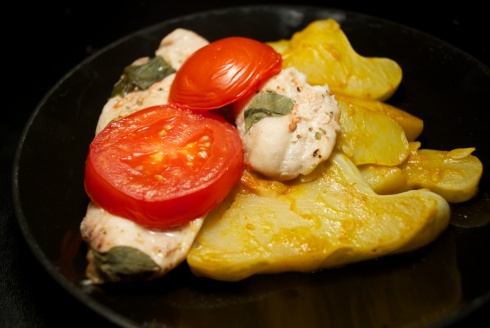 Here is a great recipe that I’ve been trying to get  posted all week! I hope all the little things kept you reading and left you satiated in the meantime!

I was lucky enough to have some lovely porgy filets in the freezer. My sister and her partner caught them on a charter boat, and came home with so many, that they threw some my way. You may substitute another mild flavored firm textured fish (think halibut or blackfish) if you don’t have porgy.

I also found these intriguing and awesome looking pattypan squash at the farm stand. They are a type of Summer squash, like zucchini, so you can slice them and prepare them the same way. They also have a good size and shape for stuffing, but I haven’t tried that yet. They stay a little more firm than zucchini, and have a beautiful light, almost nutty flavor, which reminded me of a cross between a zucchini and a winter squash. 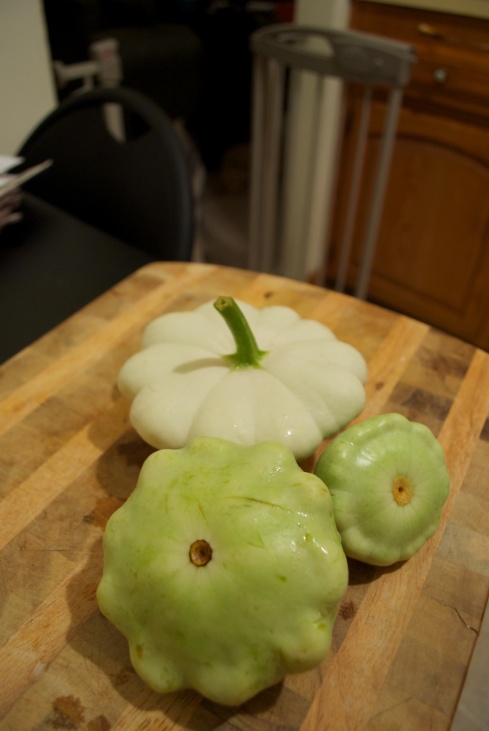 I chose to slice them, and make an Italian inspired meal. This came out so good, and as of right now I’m definitely going to consider it one of my favorite recipes.

Oh, so quick side note. I ran out of FatWorks Duck Fat (*sobs*) so I decided to try Ghee. Now Ghee is clarified butter, which made me nervous, since dairy is a big problem for me. But I seem to do Ok with this brand, Purity Farms, which is made from pastured cows, and claims to be both lactose and casein free. Really good stuff. 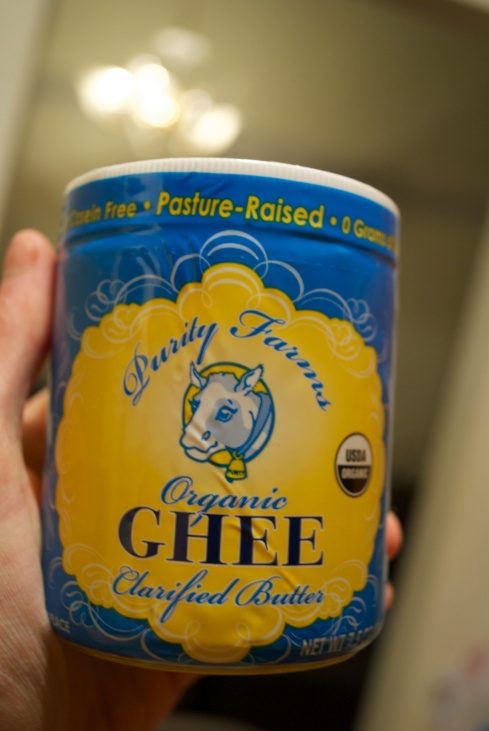 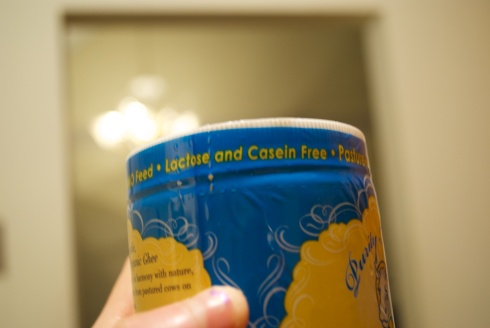 Anyway, on to the recipe. It’s actually really easy, and doesn’t require a lot of work. 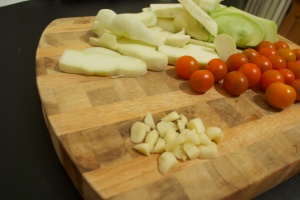 For the fish (porgy): 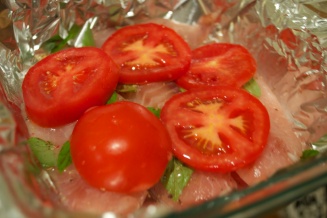 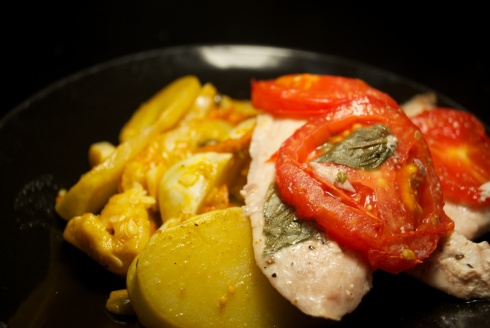