This is a SUPER EASY recipe that I put together while looking for ways to use my home made coconut milk. I didn’t have enough ingredients to make a recipe out of Sarah Fragoso’s new book Everyday Paleo: Thai Cuisine

, so I decided to just make something up and improvise, while staying a little Thai-Spired. Please adjust the spiciness to your liking. the amount of Thai chili I used produced a pretty strong level of spice, and I used mostly yellow/orange and some green ones. So please adjust according to your own preference. As hot as it was, the flavors were beautifully complimentary, bright, warm, and comforting.

Add all ingredients to a pot and simmer for 15-20 minutes until the vegetables are tender. 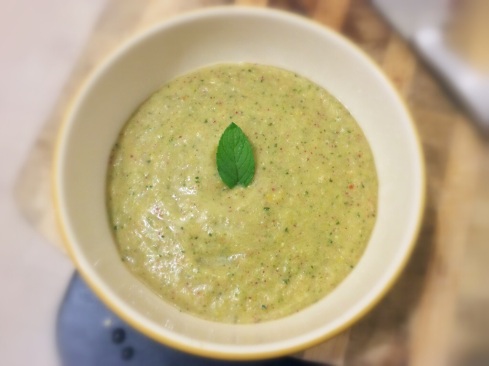 I love gazpacho, especially in the summer. It’s super easy to make, and served cold, so it’s perfect for a hot day. It’s also a great way to get a bunch of veggies into your day! Traditionally gazpacho is made with pieces of bread included in the mixture, and I’ve seen gluten-free versions made with rice, however I don’t think you need it, and instead I added an avocado for some creamy richness. Most gazpachos are tomato based, and this one DOES have tomato included, but I used a yellow, and a green heirloom variety, so it stayed a nice green color. I also went heavy on the other veggies, so it really was vegetable based rather than tomato based.

After lightly prepping the ingredients, the rest couldn’t be any simpler! Add all ingredients to a blender, and blend!

Please note, if you don’t have a high powered blender like a Ninja Kitchen System

, you might have too chop things smaller. Chances are you will have to blend a little anyway to make room as you go.

Blend until everything is liquefied and well combined. Chill and serve.

Yeah Carb Nite! As I mentioned in my last post I am following the Carb Nite Solution by John Kiefer, and tonight is my “Carb Nite” – glorious. Now, I am not binging on donuts, pizza, and scones like some people, and am keeping it pretty much paleo. I am allowing myself white rice, since it’s pretty harmless (Phase One: SUSHI ) and have recently added some full fat dairy as I mentioned previously that I’ve discovered that I can handle goat milk pretty well (Generally, I will consume it in the form of full fat goat milk kefir and some goat milk cheeses) so I found this brand of GOAT MILK ICE CREAM which will definitely serve as an occasional “Carb Nite” indulgence (Phase Two: Figs and Ice Cream) ….I figured it was a holiday…. Oh man.

Just to get side tracked for a second, let me tell you about ice cream. This past year and a half, if I had Ice Cream (Rare Occasion) it was Larry and Luna’s Coconut Milk based Ice Cream. Which is absolutely awesome. But holy cow, this Goats Milk Ice Cream by LaLoo’s is A-MAZE-ING. I don’t particularly like that it has carrageenan in it, but considering this is going to be a very occasional treat, it’s not the worse thing in the world. The two flavors I bought were the Dark Chocolate, and the Vanilla Snowflake. Absolutely lovely and rich in flavor and the level of creaminess in the texture is just not something you are going to find in the coconut based ice creams. Easy on the digestive system and delicious….I’m totally sold.

Anyway this post is not about any of that. Well I guess it is, but mainly it’s about Sweet Potatoes (Phase Three: Sweet Potato Fries!!!!)

I’m big on homemade food, and getting rid of processed artificial crap, but sometimes you don’t want to chop up a million sweet potatoes. Sorry folks, unless you know of a brand I don’t, I’m pretty sure a bag of simple sweet potato fries doesn’t exist. All the ones I’ve seen have crap oils and weird seasonings. That’s OK, who needs the freezer section anyway. I decided to just suck it up and make them myself.

As for the recipe, I cannot take any credit beyond that. These are pretty much verbatim from THIS recipe on NOM NOM PALEO‘s website. For the seasoning I used Salt, Pepper, and Paprika as described in her recipe, but added cinnamon as well. They came out amazing, so I highly recommend you check out her recipe and make them.

I love cauliflower, especially roasted, but I’d be lying if I said it wasn’t a little bit of a pain to prep. I’m a lazy chopper….I’ve said it….and the florettes get everywhere. Ok, so it really isn’t that bad, but I love learning that I can roast things whole. Yes, it takes longer….but in my opinion it’s more fun! In my research phase I took some information from recipes around the web such as This One by The Paleo Mama and This One – In the end I tweaked things here and there, and came up with this preperation. It was delicious, and the egg/coconut milk mixture I used was custard like in the crevices. I might use more coconut butter next time, and maybe get it a little crispier, but recipes like this are all about experimenting with flavors!

This isn’t really a new recipe, I just made some additions to an older one. Click the picture to go to the original. Other than using purple cauliflower instead of the yellow, I followed the recipe exactly. This time, I made a much larger….and by much larger I mean two huge batches of it. I also added an egg, onion, and used a mixture of duck fat and coconut oil (Mostly because I’m running out of duck fat, and I want to use it when making Paleo Stuffing for Thanksgiving. ) I probably could have been a little more liberal on the spices, since I was making such a big batch…but yum.  This is one of my favorite things to make. It’s probably one of the best side dishes ever. This was my first time using a food processor to chop everything. My Ninja Kitchen System is amazing. It took me literally, less than a minute each to chop my carrots, onions, broccoli, and make the cauliflower rice. Do yourselves a favor, and get a food processor….seriously.

To add the egg, once you are done sauteing the veggies, and before you put the cauliflower in, use a spoon to push everything off to the side, so that there is a bare space in the pan. Put a little coconut oil.  Crack an egg there, and break the yolk. Cover, and when it starts to become almost cooked, stir it in with everything. It should easily break into egg chunks, like you find in the Chinese food fried rice.

Woah, holy cow! I think I forgot what sweet tasted like. I normally don’t make treats, but I bought a big container of medjool dates at Trader Joe’s and had to use them. Besides, I wanted to play with my food processor again. These are definitely perfect if you’ve been craving pumpkin pie, or something completely decadent to satisfy a serious sweet tooth. They really taste like balls of super rich pumpkin pie. That’s awesome, but seriously, I don’t eat many treats, so I may freeze them and bring them to Thanksgiving, since my mom is having a Paleo Thanksgiving.  These are SUPER sweet, so you can dial down the number of dates to probably half to make a slightly less sweet version if you want. They’re also very heavy in sweet pumpkin pie flavor, so if you are looking for a savory bite, and not a “no doubts about it” dessert bite, I’d cut the amount of pumpkin in half, or even just make it a few tablespoons. Play with the ratio, and make it to your liking, that’s the beauty of dishes like this. I’m definitely not used to sweet things, so they caught me off guard. Next time I’m going to dial them down, but I know some people out there will totally appreciate these as is. They are easy too, no baking involved!

All you have to do is blend until smooth – it will be very sticky! Then Form balls, place them on a tray or in a container lined with foil or wax paper, and freeze for at least an hour, *Nom Nom Nom*

Ok, so I’ve never had polenta, but I’ve had grits.. Like grits, it’s another grain based porridge or gruel. Traditionally polenta was made by boiling corn meal, and was a common peasant food. Today, It’s easily found in the supermarket, pre-cooked and packaged in a plastic tube. Even though it’s gluten-free, It’s still a grain based food, so it’s not a part of a primal diet. I’ve never had it, but I hear it’s somewhat creamy, and at least the tube version can be baked, fried, griddled, and used as a pasta substitute. Mine doesn’t have that versatility, but I’m totally ok with that! Mine is more like the traditional mush. I decided to use some of my awesome purple cauliflower to make a baked grain free and gluten-free mock polenta. It was really yummy, and a perfect side dish to serve my crock pot pulled chicken over.

Steam the cauliflower and place in a large metal bowl. I had to do this in two batches. Slice and steam the onion and garlic, and add that to the bowl as well. Add the egg, water, and spices and mash with a fork. Then use a hand blender to get it to a creamy consistency. Pour the mixture into a 9×9 glass pan and use parchment paper or plastic wrap to press it down (I also lined the pan with aluminum foil for easier clean up, but that’s totally optional. Remove the plastic wrap/paper and bake at 400 degrees for 1 hour.